Your membership supports the important work of FAS's Experts. 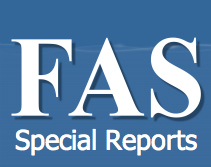 FAS Special  Reports are produced to increase the understanding of policymakers, the public, and the press about urgent issues in science and security policy. Individual authors who may be FAS staﬀ or acknowledged experts from outside the institution write these reports. These reports do not represent an FAS institutional position on policy issues. All statements of fact and expressions of opinion contained in this and other FAS Reports are the sole responsibility of the author or authors.

The United States and Russia have significantly reduced their nuclear arsenals since the end of the Cold War. The U.S. nuclear weapons stockpile has declined from more than 19,000 in 1991 to approximately 4,650 today. The history of the Russian stockpile is less well known but is estimated to have declined more than five-fold in the same time period from about 30,000 warheads to roughly 4,500 today. Russia and the United States currently hold more than 90 percent of the world’s total inventory of nuclear warheads. What is important now is to think about what role the remaining nuclear forces need to serve as the nuclear weapons states reduce them further toward, ultimately, zero, and what steps are needed to keep the reduction momentum going. Read the report, "Trimming Nuclear Excess: Options for Further U.S. and Russian Nuclear Reductions" here.

Iran and the Global Economy

The escalating confrontation between the United States and Iran over the latter’s nuclear program has triggered much debate about what actions should be taken to ensure that Iran does not develop a nuclear weapon. How might certain actions against Iran affect the global economy? FAS released the results of a study which assesses the global economic impact on a variety of conflict scenarios, sanctions and other alternative actions against Iran.

This FAS Report was published before 28 NATO member countries convened in Chicago on May 20-21, 2012, to approve the conclusions of a year-long Deterrence and Defense Posture Review (DDPR). Among other issues, the review will determine the number and role of the U.S. non-strategic nuclear weapons deployed in Europe and how NATO might work to reduce its nuclear posture.

The Future of Nuclear Power in the United States

In the wake of the devastating meltdown at the Fukushima Daiichi Nuclear Power Plant in Japan, many Americans are now reevaluating the costs and benefits of nuclear energy. If anything, the accident underscores that constant vigilance is needed to ensure nuclear safety. Policymakers and the public need more guidance about where nuclear power in the United States appears to be headed in light of the economic hurdles confronting construction of nuclear power plants, aging reactors, and a graying workforce, according to a report by the Federation of American Scientists (FAS) and Washington and Lee University.

In October 2011, Ali Vaez, director of the FAS Iran Project, and FAS President Charles D. Ferguson co-authored a report on Iran's controversial nuclear program. The report analyzed options for establishing an enhanced safeguards system for the Iranian nuclear program. It is axiomatic that persuading Iran to accept more intrusive inspections is not an easy task. The report offers a set of recommendations for all the key players to reach a negotiated resolution of the nuclear issue.

The greatest threat to Pakistan's nuclear infrastructure comes from jihadists both inside Pakistan and South and Central Asia. While there is appreciation of this danger, there are few substantive studies that identify and explore specific groups motivated and potentially capable of acquiring Pakistani nuclear weapons and/or fissile materials. This report fills that gap by exploring the Pakistani Neo-Taliban (PNT) and the groups that fill its ranks.