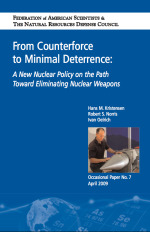 Though the nuclear arsenal of the United States is smaller than it was during the Cold War, the day-to-day deployment of forces has changed very little. The United States still has weapons ready to launch at a moment's notice at all times.

The reason is simple:  the mission for nuclear weapons has not changed from the time of the Cold War.

Most Americans would be surprised to discover that the instructions to our nuclear targeteers still include a requirement for a surprise first strike against Russian nuclear forces to destroy them on the ground. It is time to shift the focus from reducing numbers of nuclear weapons to reducing the missions of nuclear weapons.

This report describes how to reduce the nuclear missions to one:  a minimal deterrence of nuclear attack.